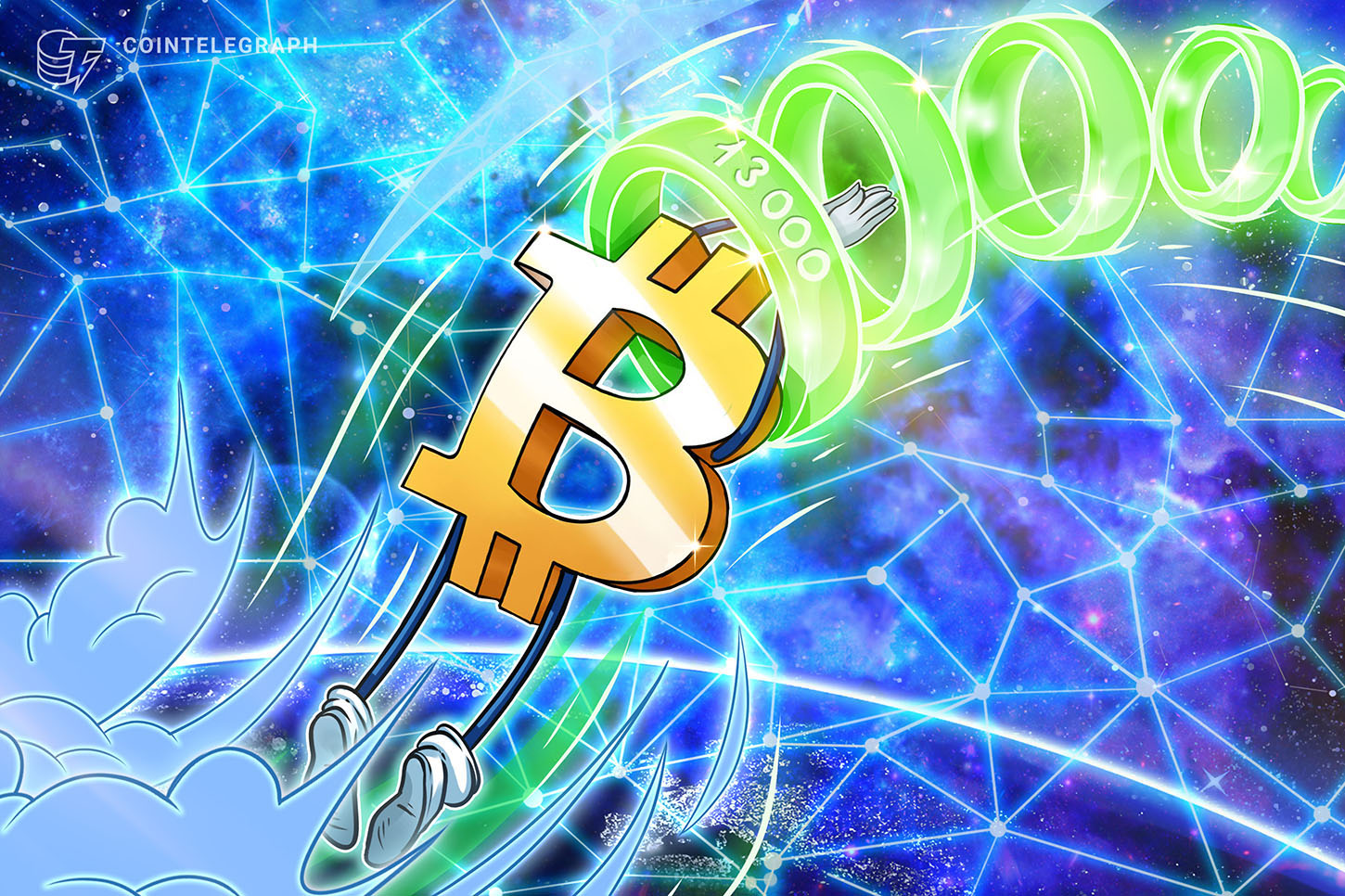 Bitcoin price has seen a healthy upward tick toward the $13,000 mark in the fourth quarter. At the start of the quarter, Bitcoin (BTC) was in the sub-$11,000 region, and from there, constant rises took the price to the $13,000 mark on Oct. 21 for the first time this year.

The price rallied to $13,217, a record high for 2020, before falling to around the $12,750 mark. This upward price movement is certainly indicative of the bullish sentiment held by investors in the current market.

The Bitcoin hash rate has also been constantly increasing since the end of the second quarter, reaching its all-time high of 157 exahashes per second on Oct. 17, according to data from BitInfoCharts. The metric estimates the number of hashes per second that the Bitcoin network has performed in the past 24 hours. It signifies the speed at which a miner arrives at a certain hash, which is the number of times a hash function can be computed per second.

Thus, the more that BTC is mined, the bigger the hash rate increase. Jay Hao, CEO of OKEx — a cryptocurrency exchange based in Malta — told Cointelegraph that the rising hash rate is good news for the network:

“It shows that miners are confident about the future price direction of Bitcoin and are scaling up resources. They are often good at predicting BTC price, although price increases don’t always follow the hash rate increases. There is no established link between the two. It’s possible we see the price rise especially if more miners hold rather than sell their new coins, but it’s not a certainty.”

However, the rising hash rate also means that miners will also need computing power to be able to mine profitably, due to the increased competition on the network. Hao further elaborated on these nuances, stating that more competition is likely to emerge in the long run, and those with lots of resources will be more successful: “If Bitcoin’s price increases this will generate more income for miners but if the price fails to rise and the hash rate increases, it will generate more costs for miners.”

Agreeing with the idea that an increasing hash rate indicates bullish sentiment, Tone Vays, the organizer of the Financial Summit, elaborated on what this might mean for Bitcoin miners, including comparing them with the miners of the Ethereum network:

“The rise in hashrate during consolidation or a slow uptrend in price is always a positive for more price upside. As price rises, miners that invested in well managed farms will profit nicely. Bitcoin mining will always be more profitable than Ethereum mining long term for the obvious reason that Ethereum’s C-Level management is on a mission to eliminate mining in favor of proof of stake.”

Because Bitcoin becomes rarer by the day, as there is only a limited amount of coins that can be mined, it’s important to also consider the role that distribution trends among BTC holders play in the sentiment of the market. According to data released by Blockchain Center, cryptocurrency exchanges currently account for 12.62% of the total distribution of BTC, and this figure is decreasing.

The two main reasons for this may be that new holders are purchasing Bitcoin from the secondary market and saving it in cold wallets as a store of value, similar to what traditional investors would do with gold, and the DeFi boom, which may lead some investors to tokenize Bitcoin for quick profits in DeFi markets rather than hold it. As this trend increases the circulation cost of Bitcoin, the price of BTC is bound to go up as exchanges’ size in the token pool decreases.

The second important figure is the amount of Bitcoin held by institutional investors and whales, which stands at 3.74% and is increasing incrementally. These large institutional investors are increasing the percentage of Bitcoin in their portfolios, as they see it as a store of value and a hedge against the uncertainty in the traditional market. Hao further stated that “With fewer Bitcoin left and more usage emerging, the Bitcoin price trend would certainly seem to be bullish.”

According to market sentiment data tracked by IntoTheBlock — which analyzes on-chain data, exchange signals and derivatives information — the market is currently “mostly bearish,” even as Bitcoin touched $12,900. The large-transactions and net-network-growth indicators point toward the market being slightly bearish, as they are contracting in size due to the aforementioned reasons. As noted by crypto analytics firm Skew, the Bitcoin options markets also indicate “volatility on the upside” for their underlying asset.

Macroeconomic indicators that are making the markets bullish

The current macroeconomic scenario is extremely positive, with United States presidential candidate Joe Biden ahead in the polls and new stimulus check talks resuming. In fact, this has, so far, been the fastest rebound for the U.S. economy in history. Since fears of the pandemic led to market lows in March, U.S. equity stocks have soared, with the Dow Jones Industrial Average gaining more than 59%, the S&P 500 gaining 63%, the small-cap Russell 2000 index gaining 70% and the Nasdaq Composite index gaining 81%. The Nasdaq has even passed the highs it reached before the pandemic.

Simultaneously, this has led to the correlation between BTC price and the U.S. equities markets to be higher, along with positive funding rates in the Bitcoin futures market. These are highly encouraging signs for Bitcoin, and the recent BTC purchases by large institutional investors such as Square and MicroStrategy are pushing the short-term bullish sentiment in line with traditional markets through the end of the year.

Related: The next big treasure: Corporations buy up Bitcoin as a treasury reserve

The excessive quantitative easing done by governments all over the world to temporarily solve their nations’ economic woes will also have a positive impact on the price of Bitcoin, according to Vays:

“Unreasonable money printing by every government in the world, corporations investing in Bitcoin as a strategic reserve and the continued war by the US against non-KYC/AML businesses is more than enough fundamental in favor of a Bitcoin price breakout.”

Even when the traditional market has faced extreme volatility, Bitcoin has held its own, proving its place as a reliable alternative asset and a possible store of value. It’s also finding more uses within the cryptocurrency space, such as the use of tokenized Bitcoin within the DeFi ecosystem. News of PayPal’s Oct. 21 announcement that it will allow crypto payments starting in 2021 has provided a confidence boost to the blockchain industry, as it adds more credibility by presenting Bitcoin as an asset that can be used for day-to-day transactions.

Want to be rich? Bitcoin’s limited supply cap means you only need 0.01 BTC

Want to be rich? Bitcoin’s limited supply cap means you only need 0.01 BTC