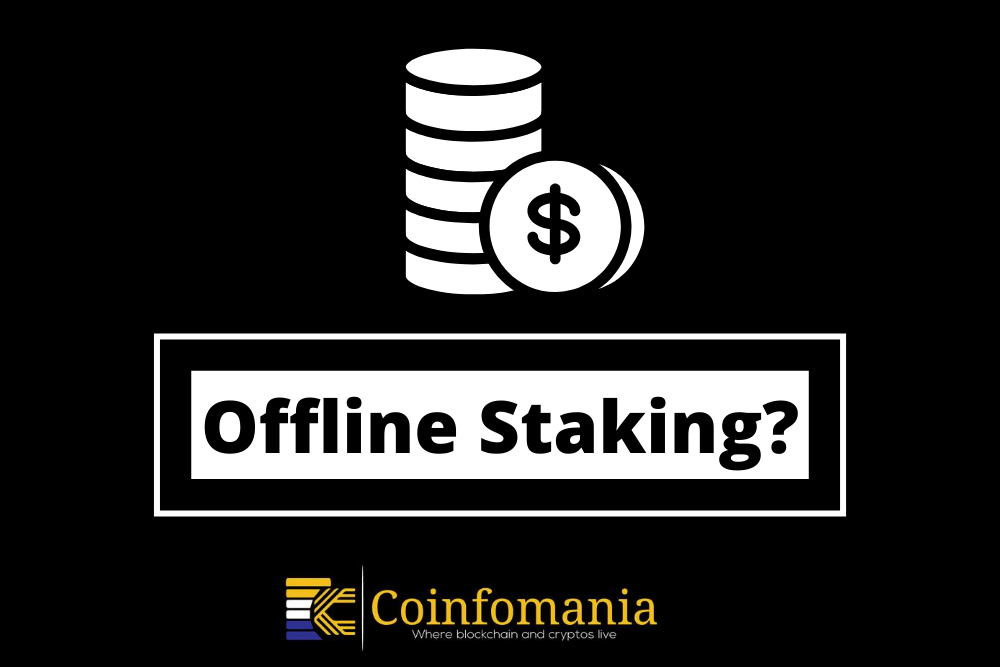 Offline staking is a relatively new concept in the crypto industry. And it is quite different from the regular online staking activity. Before delving into offline staking, let’s first understand what staking means when we talk about cryptocurrencies and blockchain technology.

What is cryptocurrency staking?

Staking is considered a less capital-intense alternative to cryptocurrency mining. It simply involves holding funds in a crypto wallet to verify transactions and support the security of a blockchain network.  However, not every cryptocurrency and blockchain support staking.

Staking does more than just support and strengthens the network; it also increases scalability. Coin holders can also earn passive income when they stake their funds.

Before transactions are verified on the Proof-of-Work (PoW) blockchain, new blocks need to be mined by solving mathematical problems. But with the Proof-of-Stake mechanism, new blocks are produced and verified by staking.

Staking concentrates on how many coins you are holding, and the amount of funds you have would determine how much reward you receive.

Staking involves validators who lock up their coins and they can be selected randomly by the protocol at specific intervals to create a block. The higher the coin secured, the higher the chances of being selected as a new block validator. Staking also gives one the power to become a member of the decision-making team in a network.

Some conditions need to be met before staking can take place. Staking could either be done online or offline. Online staking, which is the popular option, involves staking on the Internet. But what about offline staking?

What is Offline Staking?

Offline staking is also known as cold staking. It is the process of staking on a crypto wallet that’s not connected to the Internet. The wallet can be a hardware wallet, but in some cases, it is also possible to use an air-gapped software wallet (that is storing private keys on an offline device).

Offline staking, like online staking, can be likened to a savings account in centralized finance where funds are deposited into the institution, and depositors receive interests depending on the amount of funds deposited.

In offline staking, a user can either decide to take the part of a validator, also known as a Super Staker. The user may also participate as a delegate to a validator. If the user chose to be a Super Staker, he accepts delegated stakes from other token holders with a node’s aid.

However, in a case whereby the user is the delegate, they will stake their tokens to an address. This address is then delegated to a Super Staker or a larger pool staker. This delegation can be done through the staking network’s user interface, using the wallet address of their offline wallet.

Whether the user chooses to stake with a Super Staker or a larger pool staker, they will still earn staking rewards, which will be deposited to their wallet address.

However, it is essential to note that if the stakeholder moves their coins out of cold storage, they’ll stop receiving rewards. Moreover, all the offline staking processes would be completed offline without transferring the user’s funds online, thus reducing risks.

On the other hand, offline staking involves staking cryptocurrencies without needing to run a full node, syncing the entire Blockchain or being online 24/7.

Online staking involves the use of an online wallet to store tokens. While for offline staking, users use an offline wallet, also known as a hard wallet or cold storage wallet.

Offline Staking is non-custodial, which implies that the delegation user is in full control of his coins and private keys, unlike online staking, where relative control of your cryptocurrency is given to a third party or delegated to a random service.

Large stakeholders who deal with huge funds, in some cases, would be safer using cold or offline staking to ensure maximum protection of their funds while supporting the network.

Since online staking is done online, it can be attacked by bugs or other malicious programs, putting users at the risk of losing their funds. But since funds used for offline staking are not to be transferred online, it is safer compared with online staking.

This reason is that users of decentralized finance earn interests on the coins they are holding and are protected from the risks common to smart contracts used by DeFi applications, but they still face other risks like slashing. The projects that offer these offline staking solutions include Cosmos, Kava, and Polkadot.

The QTUM project successfully activated its Offline Staking upgrade on the QTUM Mainnet. This upgrade happened when QjBsaWCA19BQ76JgJbJvYzMsyAnhGQytEQ mined block 680,000 at 3:11 PM (EST) on Friday, August 28, 2020.

QTUM is a blockchain project launched in September 2017. It was created to merge the smart contracts of Ethereum with the stable blockchain characteristics of Bitcoin to benefit distributed app developers seeking an alternative platform.

Previously, Qtum only allowed participants to stake tokens online through a full node, and so participation was limited by users who did not want to or could not run a full node. But with the new offline staking upgrade, participants do not require a full node to participate in staking.

In stating the benefits of the new upgrade and the opportunities it has opened, Qtum executive John Scianna noted that “Offline staking significantly reduces the barriers to entry to participate in Qtum’s consensus, end users can delegate their tokens safely without giving up custody, or run a Super Staker node collecting fees from delegated tokens without the risks of slashing or taking control of other users Qtum.”

Generally, offline storage is considered one of the safest means of storing and staking cryptocurrency because the risks involved are minimal compared to online staking or using DeFi borrowing or lending apps.

Like all hardware wallets, users of offline wallets need to ensure they keep their hardware wallet safe from theft and should also provide secure backups of their keys. In situations where the owners of such hardware wallets lose the backup and wallet, they lose all the wallet funds, including the staked ones. They can also lose their funds if a malicious third party gains access to hardware wallet passwords, access codes, and the hardware.

Offline staking does not involve using a node, and all transactions are done without the Internet. With the new Qtum offline staking upgrade, Qtum users can now stake their cryptocurrency and earn rewards without transferring their funds online. Using offline wallets reduces users’ chances of losing their funds only if they keep their access codes, wallet password, and the hardware wallets safe.

See Also: The Ultimate Guide: How to Invest in Bitcoin Mining in 2020